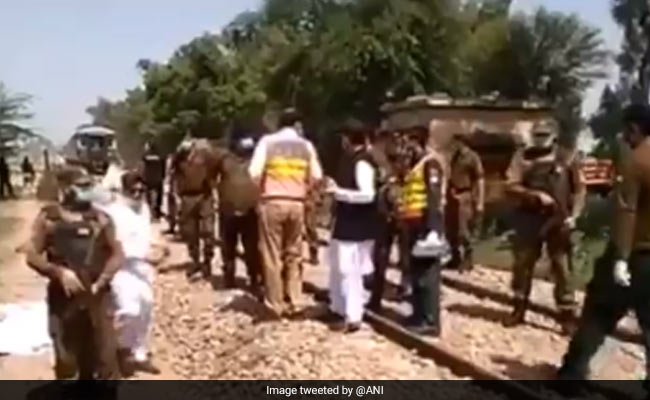 The rescue teams reached the spot and shifted the injured to the district headquarters hospital.

At least 19 Pakistani Sikh pilgrims were killed when a mini-bus carrying them rammed into a passenger train at a railway crossing in Pakistan”s Punjab province on Friday, officials said.

There have been conflicting reports about the death count as police and rescue officials confirmed 20 dead while the railways put the figure at 15. But the Evacuee Trust Property Board (ETPB) insisted that a total of 29 people, including 19 Sikh pilgrims, lost their lives in the accident.

However, the police and ETPB confirmed that the dead included 19 Sikhs who belonged to Peshawar.

The mini-bus carrying Sikh pilgrims, who were returning from Nankana Sahib in Punjab, hit the Shah Hussain Express which was coming from Karachi to Lahore at a crossing near Sheikhupura district at around 1.30 pm, officials said.

“The bus was carrying mostly Sikh pilgrims to Gurdwara Sacha Sauda in Farooqabad in the district. They had come to Nankana Sahib from Peshawar. After staying in Nanakana Sahib, they were leaving for Peshawar. The ETPB security had escorted them till the limits of Nankana Sahib,” ETPB spokesperson Amir Hashmi told PTI.

Senior police officer Ghazi Salahuddin told reporters at the crash site that some 26 people were travelling in the bus when it hit the moving train.

“Twenty passengers died that included women and children,” he said, adding the gate at the crossing was closed and it seemed the driver tried to take a shortcut instead of waiting for the gate to open.
He denied the reports that the crossing was unmanned.

The Pakistan Railways, however, in a statement said that the mini-bus collided with the train at the unmanned crossing, killing 15 people.
ETPB Deputy Director Imran Gondal said in a statement that 22 Sikhs from Peshawar had come to Nankana Sahib.

“On their way back to Peshawar their high-roof van collided with a train near Sacha Sauda Farooqabad Sheikhupura. As many as 19 Sikhs, including women were killed. The rest were injured and shifted to hospitals in the district and Lahore. The bodies were shifted to Mayo Hospital Lahore,” he said.

Prime Minister Narendra Modi said he was pained by the tragic demise of Sikh pilgrims in a road accident in Pakistan on Friday.

At least 29 people, mostly Pakistani Sikh pilgrims, were killed when a mini-bus carrying them back from Nankana Sahib shrine rammed into a train at an unmanned crossing in Pakistan’s Punjab province.

“Pained by the tragic demise of Sikh pilgrims in Pakistan. My thoughts are with their families and friends in this hour of grief,” the prime minister tweeted.

“I pray that those pilgrims injured recover at the earliest,” he said.

Pained by the tragic demise of Sikh pilgrims in Pakistan. My thoughts are with their families and friends in this hour of grief.

I pray that those pilgrims injured recover at the earliest.

The rescue teams reached the spot and shifted the injured to the district headquarters hospital, a statement by the Railways Ministry said.

The railways said a divisional engineer has been suspended from service and an inquiry has been launched.

Railways Minister Sheikh Rashid has ordered authorities to take immediate action against those responsible for the accident.