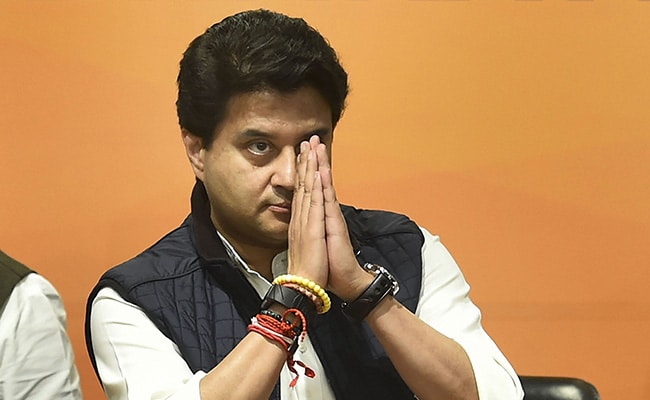 Jyotiraditya Scindia quit the Congress, his party of 19 years, in March and is now with the BJP. (File)

On Thursday, after many of the MLAs who quit the Congress and followed him to the BJP were included in the Madhya Pradesh government, Jyotiraditya Scindia borrowed the popular Hindi film title to deliver a sharp message to his former seniors, accusing them of trying to denigrate him.

Today, addressing a virtual BJP rally in Bhopal, Jyotiraditya Scindia went from tigers to eagles. “Many cheels (eagles) are circling around me and attacking me, but only those who have some meat are attacked by birds of prey,” he said, adding, “and I want to remind them again – Tiger Zinda hai.”

Congress leader Kamal Nath, whose government in Madhya Pradesh crashed when 22 MLAs exited with Jyotiraditya Scindia, returned his jibes with his own.

“Which tiger is zinda (alive)? Paper tiger or a circus one,” quipped Kamal Nath.

Digvijaya Singh, on social media, harked back to a time when he used to “hunt tigers” with Mr Scindia’s father Madhavrao Scindia, a veteran Congress leader who died in a plane crash in 2001.

“When hunting was not prohibited, I and Madhavrao Scindia used to hunt tigers. But ever since former Prime Minister Indira Gandhi brought the Wildlife Protection Act, I shoot them only on camera,” the former Madhya Pradesh Chief Minister tweeted.

But in another tweet, he appeared to take a shot at Mr Scindia. “You know the true character of a tiger. Only one tiger remains in one jungle,” wrote Mr Singh.

Yesterday, Mr Scindia made the “tiger” comment more than once. “I will certainly respond to the Congress party, but I would like to remind both Kamal Nath and Digvijaya Singh that Tiger abhi zinda hai (tiger is still alive).” He repeated the remark at a party function later, according to Press Trust of India.

Mr Scindia quit the Congress, his party of 19 years, in March after a long feud with the Madhya Pradesh veterans. His exit brought the 15-month-old Kamal Nath government down and enabled BJP’s Shivraj Singh Chouhan to return to power for the fourth time.

Mr Chouhan took charge in March and functioned with five ministers amid a disagreement over ministerial posts, with Mr Scindia pushing his loyalists, especially those who expected to be rewarded for defecting from the Congress.

After long negotiations, Mr Scindia prevailed and snagged ministries for 11 of his candidates, claiming 41 per cent of the cabinet. This meant that Mr Chouhan was forced to give up on some of his candidates, including experienced former ministers.

In 2018, when the BJP lost the state election, Mr Chouhan had made the same comment – “Tiger abhi zinda hai” – to indicate that he would make a comeback.

Soha And Brother Saif Ali Khan In A Rakhi-Special Throwback. “Looks Like Sara…

Popular News 53 mins ago
Loading ... Load More Posts No More Posts
Subscribe to our newsletter
Sign up here to get the popular and latest news updates delivered directly to your inbox.
You can unsubscribe at any time

6 Staff Members Of BS Yediyurappa, In Hospital For Covid,…

Google Pixel 4a Price, Specifications, Renders Leak Ahead of…