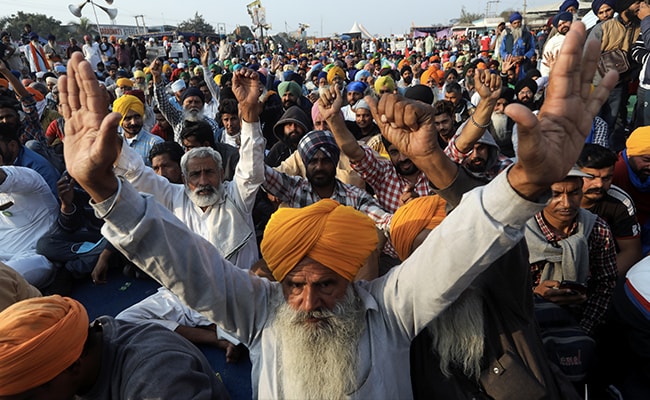 Thousands of protesters had clashed with the police during a tractor parade. (File)

Agitating farmer union on Tuesday objected to Delhi Police putting posters that allegedly warned off protesters at the Tikri border site, even as the force claimed these were not new and only informed the protesters that they would not be allowed to enter the national capital.

In a statement, the Samyukta Kisan Morcha, an umbrella body of farmer unions that is spearheading the ongoing agitation against the three agri laws, said that it is opposed to the police’s move as the protesters were exercising their constitutional right and appealed to the farmers to continue their sit-in peacefully.

Thousands of farmers, mostly from Punjab, Haryana and western Uttar Pradesh, have been camping at three Delhi border points — Singhu, Tikri and Ghazipur — for nearly 90 days, demanding a complete repeal of the three agri laws and a legal guarantee on Minimum Support Price for crops.

“The Delhi Police has placed some posters at the Tikri border protest site where farmers have been warned that they will have to vacate the area. Such posters are irrelevant as farmers have been staging a peaceful protest by exercising their constitutional rights.”

“We will oppose the conspiracy to end the protest with these kinds of threats and warnings,” the SKM said in the statement.

In the posters, the police have not given any deadline to the protesting farmers to vacate the area.

On its part, the Delhi Police said it is a “routine” process.

“The posters were pasted at the border area after the protest started. It is a routine exercise. Police have conveyed to them through posters that they are sitting in the jurisdiction of Haryana and they are not allowed to enter the national capital unlawfully,” a senior police officer said.

Thousands of protesters had clashed with the police during a tractor parade called by the agitating farmer unions on January 26.

After police permitted the rally, many protesters deviated from the agreed route and reached the Red Fort on tractors. They entered the monument and some of them even hoisted religious flags at the ramparts.

The government has projected the three farm laws as major reforms in the agriculture sector that will remove the middlemen and allow farmers to sell anywhere in the country.

However, the protesting farmers have expressed apprehensions that these laws would pave the way for eliminating the safety cushion of Minimum Support Price and scrap the mandis, leaving them at the mercy of big corporates.

The Centre has maintained that the MSP and mandi systems will continue and will also be strengthened.