Suzuki riders Alex Rins and Joan Mir claimed first and third on the podium, separated by Alex Marquez of Honda, claiming his second consecutive podium of the season. Title contender Fabio Quartararo finished outside points and is now placed second in the rider standings behind Mir. 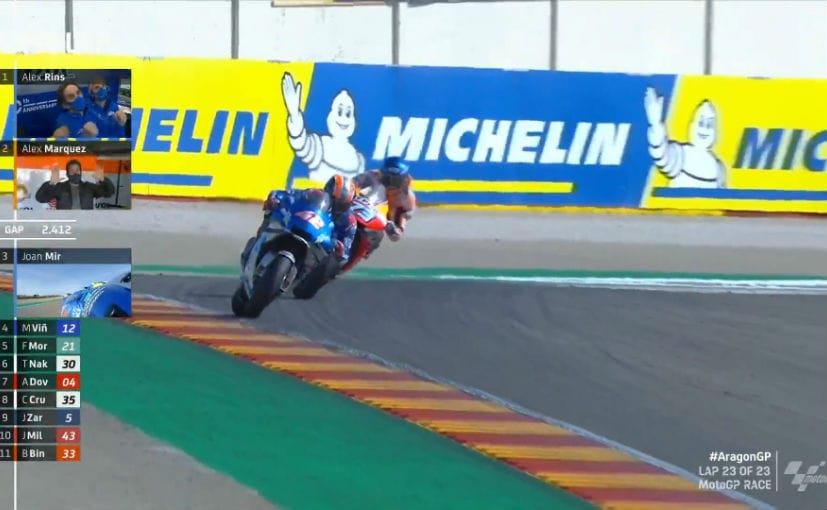 Alex Rins became the eighth different winner in the 2020 MotoGP season, claiming victory in the Aragon Grand Prix. The thrilling race was a mix of highs and lows for the riders with Rins and Honda’s Alex Marquez making for an exciting 1-2 finish, while points leader Fabio Quartararo had a disaster of a race finishing in 18th place. The result managed to push the third-finishing Joan Mir to the top of the points table making it a win-win weekend for Team Suzuki Ecstar. 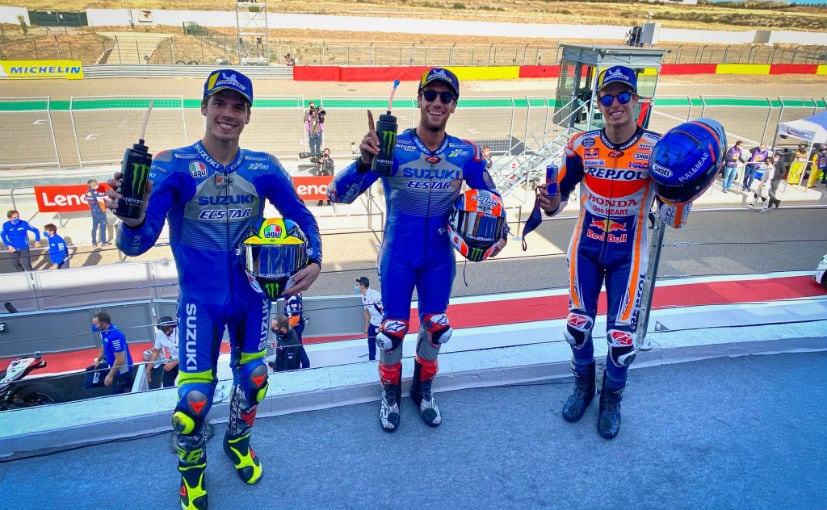 On the podium – Alex Rins, Alex Marquez and Joan Mir

Quartararo started the race on pole but Petronas Yamaha SRT teammate Franco Morbidelli managed to take the lead on the first corner. However, the lead was short-lived as he ran wide allowing Maverick Vinales and Quartararo to pass the rider once again. With Vinales in the lead, the factory Yamaha rider was charging in front building a lead over Fabio, while the 10th-placed Alex Rins was now running fourth putting up a tough fight against the top Yamahas. At the end of the first lap, Vinales had a built a gap of nearly a second, followed by Quartararo while Rins had passed Morbidelli to take third.

Quartararo was now looking to close-in on Vinales and reduced the gap to half a second, but also had Rins breathing down his neck for P2. The top three positions remained the same up to Lap 5, when Quartararo ran wide on the last corner of the lap allowing Rins to move up to P2. The Petronas rider ran wide on the following laps that severely affected his pace and by Lap 15, he was down to 17th and out of points. 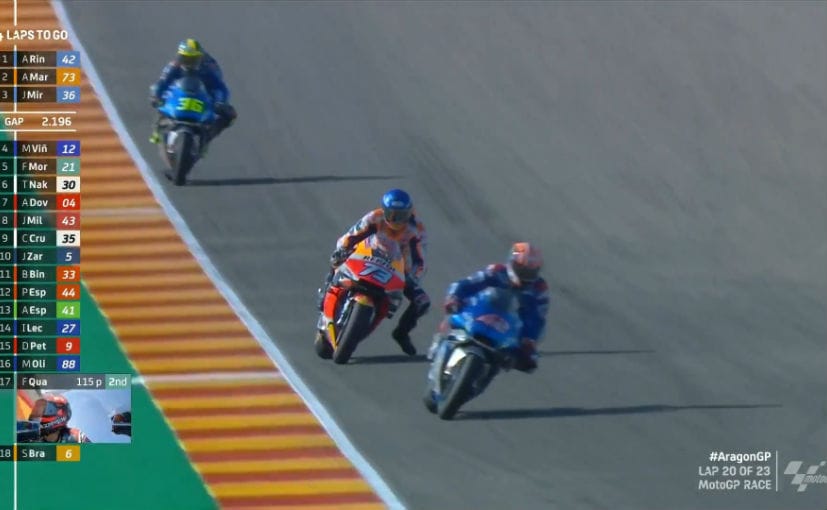 At the front, Rins was now chasing Vinales for the lead and passed the rider on Lap 8. Vinales couldn’t maintain the position and was passed by Joan Mir on Lap 13 after a bit of resistance. It seemed like a 1-2 finish for Suzuki, however, Alex Marquez turned out to be the surprise contender making it to the top, having started 11th on the grid and was quick rise up by seven places on the opening lap.

The factory Honda rider was now behind the top two Suzukis and found the perfect opportunity to pass Mir on Lap 18 and separate the teammates. He was now eyeing the top spot and built pressure on Rins. However, Rins maintained composure and crossed the chequered flag just 0.263s ahead of Marquez Jr., taking his first win of the season.

For Alex Marquez, the rider secured his second consecutive podium after Le Mans, while Mir was a distant third, 2.644s behind the race leader but enough to keep Vinales off the podium. Finishing behind the fourth-placed Vinales was Takaaki Nakagami on the LCR Honda, which was followed by Morbidelli claiming sixth. Andrea Dovizioso claimed P7, having started at P13 on the grid, followed by Cal Crutchlow at P8 on the LCR. Pramac’s Jack Miller took P9 followed by Avintia Ducati’s Johann Zarco rounding up the top ten finishers of the race. 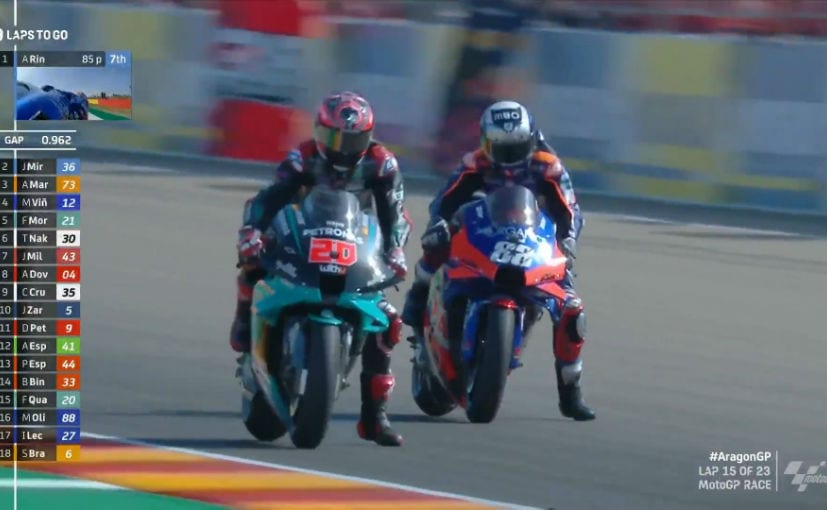 Fabio Quartararo couldn’t recover after falling from the top order and dropped outside of points, finishing 18th

Coming in next were KTM riders Brad Binder and Pol Espargaro at P11 and P12 respectively, followed by Aprilia’s Aleix Espargaro and Tech 3 KTM’s Iker Lecuona at P14. French GP winner Danilo Petrucci claimed the last point in the race. Finishing outside of points were Miguel Oliveira on the Tech 3 KTM, followed by Stefan Bradl on the factory Honda and Quartararo. The final finishers were Bradley Smith on the Aprilia and Tito Rabat of Avintia.