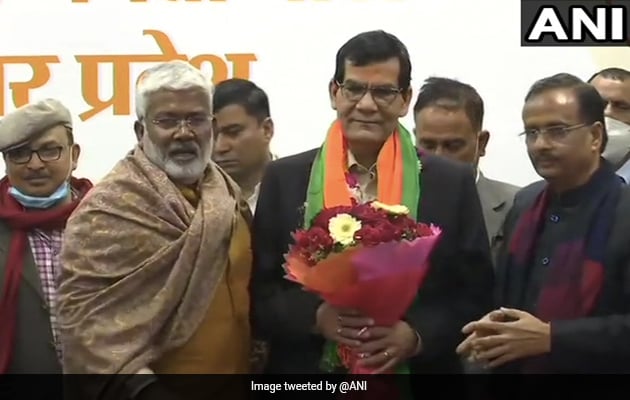 A former IAS officer who has spent years in Prime Minister Narendra Modi’s team and is among his most trusted aides, joined the BJP today. Arvind Kumar Sharma joined the party in Uttar Pradesh’s Lucknow.

Mr Sharma is tipped for the UP legislative council and may be given an important post in the UP government of Yogi Adityanath. Elections to the 12 seats of the Legislative Council are due on January 28.

The bureaucrat was Secretary in the centre’s Ministry for Micro, Small and Medium Enterprises (MSME). His voluntary retirement this week came as a surprise to many but by all accounts, he is set for a significant political role in Uttar Pradesh.

The 1988 batch IAS officer of the Gujarat cadre is from Mau in UP.

Mr Sharma worked with PM Modi not just in Delhi but also when he was Chief Minister of Gujarat before 2014. He joined him as Secretary in 2001, when Mr Modi began his stint as Gujarat Chief Minister.

When PM Modi was in Gujarat, Mr Sharma was chief executive of the Gujarat Infrastructure Development Board. He joined the PM’s Office in 2014, when the BJP came to power after a landslide victory.

Last year, Mr Sharma was moved to the critical MSME ministry in May, when the government was working on relief for the sector from the coronavirus lockdown.

Violence At BJP Roadshow In Kolkata Amid “Go Back” Chants

Coronavirus Found In Ice Creams In China! Should We Avoid Our Favourite Dessert?

Tata Motors Ties Up With Banks, NBFCs To offer an array of financial offerings to Commercial Customers

How To Make Masala Papad Taco Chaat, A 5-Minute Snack Without A Drop of Oil

I’m For Facebook, No, Wait, You Are: Kapil Sibal-Mukul Rohatgi Banter

4th Test: Australia Have To Be Patient, Bowl In Good Areas On Day 5, Says Steve Smith

8 Cows Killed, 6 Injured By Speeding Rajdhani Express In UP

Watch: How To Make Vegan Kheer/Payasam By Replacing Milk With These Healthy Alternatives

Jio To Embed E-Commerce App Into WhatsApp Within 6 Months:…