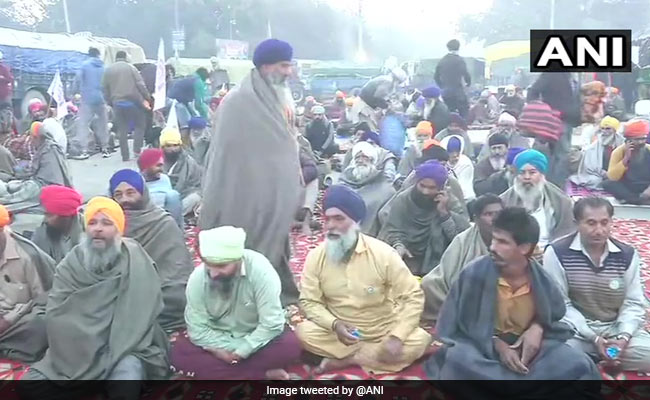 Farmer of the country has come to Delhi to protest against the black agriculture laws: Rahul Gandhi

The Congress on Monday launched a social media campaign to muster support for the farmers protesting against the centre’s new farm laws with party leader Rahul Gandhi saying, when farmers raise their voice, it resonates across the country.

“The Modi government has persecuted the farmer – first it brought black laws and then used lathis against them, but it forgot that when the farmer raises his voice, it resonates throughout the country. You also raise your voice against the exploitation of farmers and join the #SpeakUpForFarmers campaign,” Rahul Gandhi said in a tweet in Hindi.

“The farmer of the country has come to Delhi in the cold, leaving his home and fields, to voice his protest against the black agriculture laws. In this battle of truth and untruth, with whom do you stand – the ”Annadata” (food-giving) farmer or the PM’s capitalist friends,” Mr Gandhi said in another tweet.

The former Congress chief said wherever these farmers are protesting, the people and Congress workers should stand in their support and provide them food.

“The question is why is the farmer out on the roads, travelling thousands of kilometers and is stalling traffic. PM Modi says the three farm laws are in favour of the farmer, but if these laws are in the farmer’s favour, why is he not happy and why is he protesting,” asked the Congress leader.

“These laws are for Narendra Modi’s two-three friends and are aimed at stealing from the farmers. That is why we all have to together stand with the strength of India – the farmer,” he said.

He also shared an over one-minute-long video as part of the campaign in which the Congress party asked the government to listen to the grievances of the farmers and not use force against them.

The video also alleged that while the farmers are producing food grains to feed the country, they are facing water cannons and lathis at the hands of the Modi government.

“In the name of farm laws, all billionaire friends are benefitting. How can farm laws be framed without even talking to farmers? How can the interests of farmers be ignored?” she said in a tweet in Hindi.

“The government will have to listen to the farmers. Let us together raise our voice in support of farmers,” she said while seeking public support in favour of the farmers.

Congress chief spokesperson Randeep Surjewala said Prime Minister Narendra Modi should announce the suspension of the three agri laws and take back all 12,000 FIRs filed against farmers without any pre-conditions.

He also demanded that PM Modi should himself talk to the representatives of all farmer unions and assures them of redressing their grievances.

Senior Congress leader Mallikarjun Kharge said, “Lakhs of farmers who are protesting the anti-farmer laws passed by the govt have now been stopped outside Delhi. If the BJP is convinced of the laws passed by them, they should have to courage to meet the farmers and convince them.”

Former Uttarakhand chief minister Harish Rawat lamented that the farmers who are helping the country’s falling economy have been rewarded with the new “black laws” and their grievances have not been heard.

“There is a conspiracy to take away the MSP (minimum support price), demolish the existing mandi structure and end the procurement system through the FCI,” Mr Rawat said.

“The farmers have crossed all hurdles and reached Delhi to air their grievances. Hear out the farmers and their pain, but do not ignore their voice and talk to them… scrap the three black laws,” Rawat said.

The Congress on its official Twitter handle demanded that the government must stop the alleged violence and atrocities against the farmers who are exercising their right to protest.

“Use of brute force on the souls that feed a billion stomachs is nothing but grave, inhumane, gut-wrenching injustice. India will not stand for this. India will #SpeakUpForFarmers,” the party tweeted from its official handle.

It also alleged, “First they undemocratically passed the draconian anti-farmer laws, now they are hell-bent on stifling our farmers” democratic voices.”

A host of party leaders including PL Punia, Tariq Anwar, Shashi Tharoor, Salman Khurshid, Mohan Prakash and Sunil Jakhar also spoke in support of the farmers and urged the government to redress their grievances.

The Congress has launched a day-long online campaign in support of the farmers who are agitating on the roads against the farm laws.

The ongoing protests by thousands of farmers against the centre’s new farm laws entered the fifth day on Monday, with the protesters threatening to block all five entry points to the national capital

Rejecting the centre’s offer to hold talks once they move to the Burari ground, the farmers said they will not accept any conditional dialogue and have called a meeting to discuss their next course of action later in the day.

Farmers, who had reached the Nirankarai Samagam Ground in Burari on Saturday, continued their protest there while traffic continued to be disrupted in the city due to the protests.

Why Infosys Will Hire More In US Even After Donald Trump…