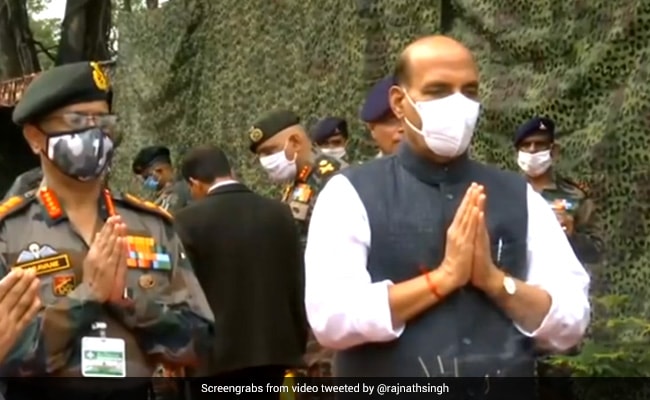 Defence Minister Rajnath Singh has said India wants peace along its border with China. He made the statement after performing “Shastra Puja” – the customary worship of weapons – at Sukna War Memorial in Sikkim’s Darjeeling, on the occasion of Dussehra today.

He was accompanied by army chief General Manoj Mukund Naravane, besides other officers and jawans.

“India’s brave soldiers have sacrificed their lives (for India’s safety). We want that the Indo-China border tension should end and peace should be preserved. But unpleasant incidents keep happening. However, I am confident that our soldiers will not let anyone take even an inch of our land… History will remember the courage of Indian soldiers,” he said after the ceremony.

#WATCH India wants that the Indo-China border tension should end & peace should be preserved. Also, I am confident that our army will not let anyone take even an inch of our land: Defence Minister Rajnath Singh at Sukna War Memorial in Darjeeling. #WestBengalpic.twitter.com/1c9eFjN5Ny

Rajnath Singh worshiped weapons, equipment and armoured vehicles as a priest chanted prayers in Sanskrit. The priest ended the ceremony with prayers for “safety of India’s borders”.

The “Shastra Puja” near India’s de-factor border comes amid the standoff with China in eastern Ladakh. A tense confrontation between Indian and Chinese soldiers also took place in north Sikkim in early May.

Earlier in the morning, the minister had extended Dussehra greetings on Twitter. “Best wishes to all the countrymen on the festival of Vijayadashami. On this auspicious occasion today, I will visit the Nathula area of Sikkim and meet the soldiers of the Indian Army and will also be present in the arms worship ceremony,” he wrote.

The Defence Minister is on a two-day visit to West Bengal and Sikkim to review the preparedness of the forces. He is accompanied by army chief General Manoj Mukund Naravane.

On Saturday, the Defence Minister and the army chief were briefed in detail about the situation along the de-facto border in Sikkim sector.

The army has significantly strengthened its troops and weaponry along the nearly 3,500 km-long de-facto border with China, including Sikkim and Arunachal Pradesh sectors given that tension in Ladakh has shown no sign of easing.

In an interaction with army personnel, Mr Singh conveyed his wishes to them on the occasion of Dussehra and praised their dedication in securing the borders.

“The nation and its boundaries are secure due to you,” he had said.

Mr Singh has been performing Shastra Puja on Dussehra for the last several years including during his tenure as the Union Home Minister in the previous National Democratic Alliance (NDA) government.

Last year, the Defence Minister had performed the Shastra Puja in the French port city of Bordeaux during a visit to the country to formally receive the Rafale fighter jets.

(With inputs from Agencies)

Ravindra Jadeja Ruled Out Of T20I Series vs Australia, Shardul Thakur Added To The…