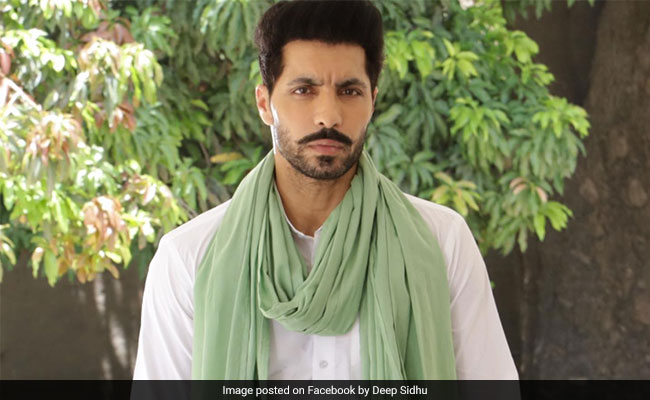 Farmers ‘ Protest: Actor Deep Sidhu has been named in the FIR in the Red Fort violence case.

New Delhi:
Delhi Police’s probe into the unprecedented violence during a tractor rally by farmers on Republic day is now focused on finding those involved in planting a Sikh religious flag at the Mughal-era Red Fort. Tuesday’s tractor rally went rogue as protesters forced their way inside the fort complex placed a flag. Several teams of Delhi Police’s special cell or anti-terror unit are scanning through footage of violence at the iconic fort complex to identify those who hoisted the flag there. Actor-activist Deep Sidhu, whom farmers have accused of being responsible for the unprecedented violence during the Republic Day tractor rally, has been named in a case filed by the Delhi Police, sources told NDTV. A handful of farmer leaders have also been named in the 25-plus cases filed by the police since Tuesday evening. The police has issued look-out notices against farmer leaders and others named in FIRs. Their passports too will be seized to prevent them from travelling abroad.

Here are the top 10 updates on farmers’ protest violence:

IND vs ENG: Wasim Jaffer Is Asked For Meme On Pitch Row, He Comes Up With A Gem

Pooja Batra’s Throwback Mood Summed Up In A Stunning Pic

Popular News 35 mins ago
Loading ... Load More Posts No More Posts
Subscribe to our newsletter
Sign up here to get the popular and latest news updates delivered directly to your inbox.
You can unsubscribe at any time