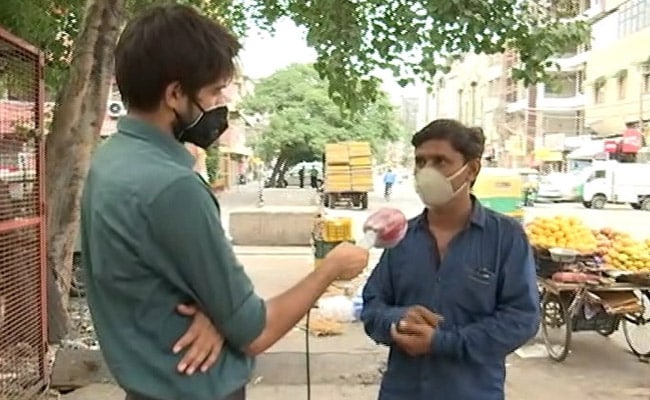 Chhote is a fruit vendor in north Delhi’s Jagatpuri area.

For the second time in a week, Phool Mia aka Chhote, a fruit-seller in north Delhi can barely believe his eyes. Just three days after he found his stall looted by ordinary people of mangoes worth nearly Rs 30,000, he is stunned by the response he has received.

“Those who had to steal, did so. But I am overwhelmed that so many people have helped me,” he said.

Over the last 24 hours, since NDTV ran his story and shared his bank account details, more than a hundred people have sent in contributions ranging from Rs 100-200 to several thousands.

Until this morning, he had no clue about the outrage that his ordeal had provoked or the outpouring of solidarity.

When NDTV went back to him on Saturday and told him about the response from viewers and readers, Chhote was taken aback.

A quick trip to the bank revealed that he had received more than enough to cover his losses.

“Ab jaake jaan mein jaan aai hai (It’s like I’ve got my life back). I will finally get to celebrate Eid, take care of my children,” he said.

On Wednesday, scores of people had pounced on crates left unattended by Chhote in Delhi’s Jagatpuri area after he had to move his push-cart because of a fight.

Riders put mangoes in their helmets. Auto-drivers parked their rickshaws to have their share. Others called out like hawkers, encouraging everyone to help themselves. The incident caused a small traffic jam in the area.

A video of the incident was recorded by a witness and shared on social media, showing the sickening free-for-all in the middle of the nationwide COVID-19 lockdown. NDTV received hundreds of requests to share his bank details so that people could help him after the story was published on Friday.

Anemia: What Is Anemia? Symptoms And Prevention | Diet…

1 Soldier Killed In Action, 9 Injured In Maoist Attack In Chhattisgarh

Man Stabbed With Skewers For Not Sharing Cigarette, Dies:…