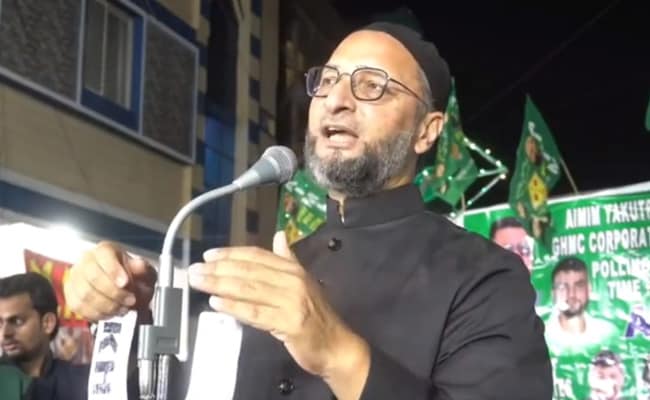 Hours after a Karnataka minister said the BJP would “definitely not give tickets (to contest elections) to Muslims”, AIMIM chief Asaduddin Owaisi hit back, labelling the remark “disgusting and shameful, but not surprising”.

Mr Owaisi, who has found himself at the end of vitriolic attacks in the run up to Tuesday’s Hyderabad municipal election, said such an ideology was incompatible with the values of the Constitution.

“Disgusting and shameful, but not surprising. Hindutva believes that only 1 community has the right to political power and all others are subservient. This ideology cannot co-exist with our Constitution, which talks about liberty, fraternity, equality and justice,” Mr Owaisi tweeted Monday afternoon.

Earlier KS Eshwarappa, Karnataka’s Rural Development and Panchayat Raj Minister, said the BJP would give tickets to Hindus but not Muslims.

The Hyderabad municipal election – essentially a mayoral race – has emerged as a high-stakes battleground for the BJP, which has unleashed an army of big guns on the campaign trail.

On Sunday Home Minister Amit Shah held a roadshow and said the BJP would “rid Hyderabad of Nawab-Nizam culture“. A day earlier Yogi Adityanath, speaking from the Old City – which is widely seen as a stronghold of Mr Owaisi -, said the BJP would would rename the city as Bhagyanagar.

Karnataka MP Tejasvi Surya and Telangana BJP chief Bandi Sanjay have referred to Mr Owaisi as “Jinnah” and threatening a “surgical strike to flush out Rohingyas and Pakistanis“.

Mr Owaisi, though, has not taken these hits lying down.

On Saturday, at a public rally of his own, he taunted the BJP for deploying such senior figures for a local election. “Now only Donald Trump is left to campaign…” he said.

Last week he issued a direct challenge to Prime Minister Narendra Modi, inviting him to join the BJP’s campaign trail. “You bring Narendra Modi… We will see what happens. Organise his meeting here and we will see how many seats you will win here,” he said.

Boosted by its victory in an Assembly bypoll for the Dubbaka seat earlier this month, the BJP has targeted this election as a chance to carve out a space for itself in the southern state.

In 2016 the party claimed just four of 150 seats as Telangana Chief Minister K Chandrashekar Rao’s TRS swept 99. A strong result in Hyderabad now will help press its case in Tamil Nadu, where Assembly elections are due early next year.

Results for the 150 wards will be declared December 4.

With input from ANI

Popular News 41 mins ago
Loading ... Load More Posts No More Posts
Subscribe to our newsletter
Sign up here to get the popular and latest news updates delivered directly to your inbox.
You can unsubscribe at any time

India To Gift 5 Lakh Doses Of Covishield Vaccine To Sri…