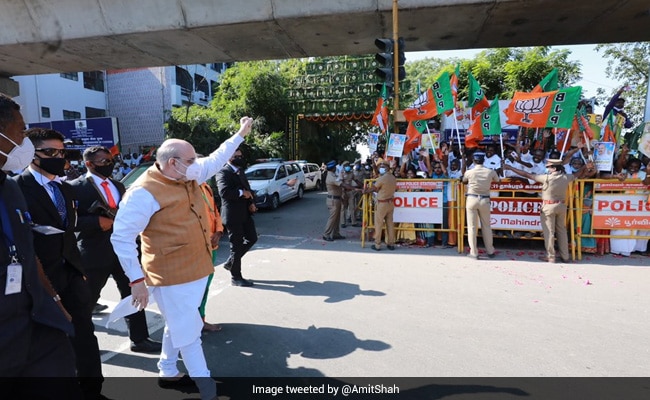 Amit Shah will arrive in Hyderabad on Saturday (File)

Union Home Minister Amit Shah who arrives in Hyderabad on Saturday morning will start his day with a visit to the Bhagyanagar temple that stands abutting the 429-year-old Charminar.

The choice of the Hindu temple amid a campaign that has touched highly polarised notes already reinforces the dominant narrative of the BJP’s election campaign for municipal polls in Hyderabad.

State BJP president Bandi Sanjay known for his provocative speeches has already declared that his “Vijay Yatra” or victory lap after winning the mayoral election would start from there too.

“They are asking, why Bhagyanagar temple? I say, why not Bhagyanagar temple? Is it in Pakistan? They say it will lead to India-Pakistan clashes? Why? Are you saying the temple is in Pakistan. If they say yes, then we will carry out surgical strikes, to weed out illegal Rohingya, Pakistani and Afghanistanis, on whose vote the TRS-MIM depend,” he had earlier said.

Mr Shah’s visit to the temple will be followed by a roadshow in Sanath Nagar, Khairatabad and Jubilee Hills constituency.

Earlier on Friday, a light shower and cool breeze brought in by Cyclone Nivar, now a deep depression set the mood for a colourful roadshow addressed by BJP national president JP Nadda in Hyderabad.

This came just a day after the BJP promised in its manifesto that it would give Rs 25,000 to every family hit by floods in October that ravaged many parts of the city.

The ruling Telangana Rashtra Samithi (TRS) had announced Rs 10,000 flood relief to every family hit by the flood. The Congress promised up to Rs 50,000.

Mr Nadda’s roadshow was followed by a meeting with intellectuals.

The local election in Hyderabad has the BJP’s A-listers flying down to the city for a campaign that has become less and less about roads and sanitation.

Both Mr Nadda and Mr Shah’s visit to the city this weekend, and campaigners like Yogi Adityanath and Smriti Irani earlier, signify that the ruling party’s formidable election machinery is entirely focused the set of municipal wards in India’s top IT hub.

Voting will be held in 150 municipal constituencies, or wards, in the Greater Hyderabad Municipal Corporation (GHMC) polls on December 1 and a mayor will be elected for the corporation that has a budget of Rs 5,380 crore this year.

The ruling TRS dominated the last civic polls. This year, Chief Minister K Chandrashekar Rao or “KCR” is up against a BJP determined to prove that its recent, unexpected victory in an assembly byelection was no fluke.

Amitabh Bachchan On “Nightmares And Anxiety” Of Being An Actor. Madhavan…

How VK Sasikala’s Return Can Shake Up Tamil Nadu…