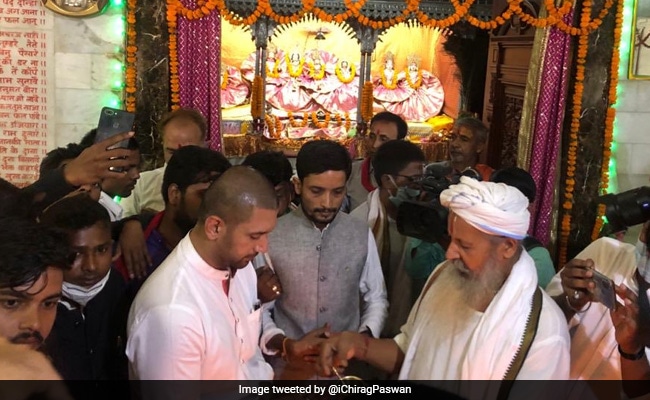 Bihar Polls: The LJP has fielded candidates against the BJP in five of the state’s 243 seats.

Chirag Paswan, whose rebellion against Nitish Kumar and his Janata Dal United is speculated to be backed by the BJP, stepped up his campaign today, seeking votes even from the BJP voters who do not support the Chief Minister.

His tweet this morning read: “I request you to please vote for LJP candidates to implement #Bihar1stBihari1st. Everywhere else vote for the BJP. The coming government will be a #Nitish-free government.”

Altogether, his Lok Janshakti Party is contesting 138 seats – 122 of them against ten Janata Dal United and its ally, Jitin Ram Manjhi’s HAM.

The LJP has fielded candidates against the BJP in five of the state’s 243 seats. This, however, was done with the permission of the party which Chirag Paswan said would be his partner in government formation after the election.

The BJP has been emphatic in declaring that Nitish Kumar will remain the Chief Minister after the election. It has also underscored that any party not accepting his leadership will not be considered part of the NDA and cannot seek votes in the name of PM Modi.

But its lack of action against Chirag Paswan has given rise to speculation that the LJP is just the “B Team” of the BJP and is meant to keep Nitish Kumar under check.

On his part, Chirag Paswan – who has kept up the invective against Nitish Kumar since the lockdown started – has pledged allegiance PM Modi with the dramatic Hanuman metaphor. The image of PM Modi is seared in his heart and will be visible to anyone if he slashes open his chest, he said.

In this election, the 37-year-old See has said that he wants a BJP Chief Minister. He has committed the votes of the Paswan community to the BJP in the other 105 seats the BJP is contesting.

The approach suits the BJP, as it ensures a better strike rates for its candidates and keeps the Janata Dal United votes under check.

At the same time, the BJP has kept all its bases covered with its public support for Nitish Kumar.

Since the lockdown, Mr Kumar has lost much goodwill for what was seen as his lack of support for Bihari migrant workers and students stranded in other states.

The opposition Rashtriya Janata Dal has claimed that it has led to the exponential footfall at the rallies of its leader Tejashwi Yadav.

Since the lockdown, the LJP and a section of BJP leaders have been clamouring for a replacement of Nitish Kumar, saying his reputation as “Sushashan babu” (Mr Good Governance) has taken a hit and that he would be a liability in this election.

Bihar will vote on October 28, November 3 and 7 for a new government and the results will be announced on November 10.

US Pharma Firm Moderna To Request US, Europe For COVID Vaccine Authorisation On…

Don’t Want To Feel Like Laughing Stocks, Says Kieron Pollard After Being Outplayed By New Zealand In T20I Series