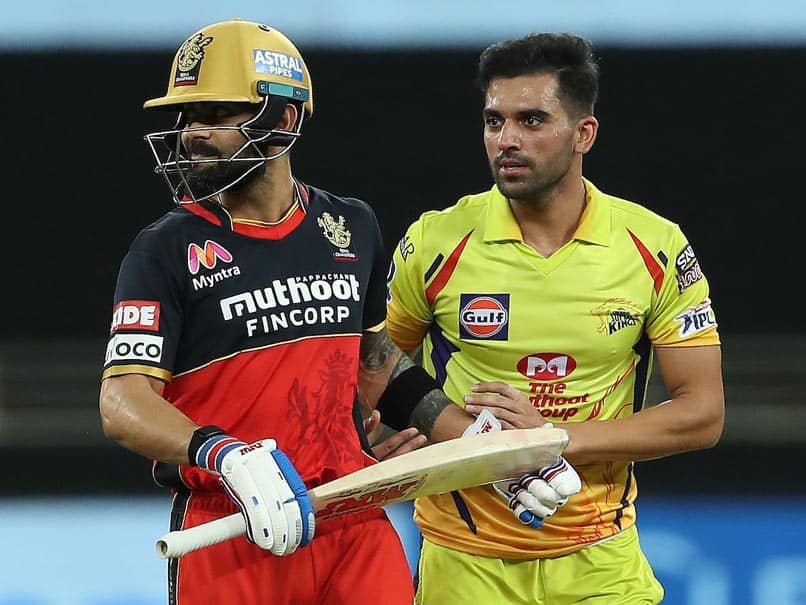 RCB vs CSK: Deepak Chahar will have the difficult task of stopping Virat Kohli on Sunday.© BCCI/IPL


Royal Challengers Bangalore (RCB) skipper Virat Kohli’s best knock in IPL 2020 so far, has arguably been the unbeaten 90 against Chennai Super Kings (CSK). On a night when other batsmen struggled to make much of an impact, Kohli batted with freedom and looked composed. The 31-year-old scored 90 runs off 52 deliveries, in an innings comprising of four boundaries and as many sixes. RCB posted a total of 169 runs for the loss of four wickets following Kohli’s heroics, with CSK restricted to a score of 132. As RCB take on CSK in their second encounter of the ongoing edition on Sunday, the 31-year-old will relish an opportunity to replicate the same impact.

Deepak Chahar will, however, look to make Kohli work hard for his runs, having been one of the Chennai-based franchise’s better performers this season. At the same time, what cannot be disputed is the fact that Chahar has struggled to perform at the levels expected of him.

A good performance against RCB on Sunday will certainly help improve things in this regard. However, it will be easier said than done, considering how difficult it is to unsettle a determined Kohli.

CSK skipper MS Dhoni will be hoping for an improved performance from his bowlers, after defeat by a margin of 10 wickets against Mumbai Indians (MI) on Friday. Can Chahar step up and lead by example?

Don’t Want To Feel Like Laughing Stocks, Says Kieron Pollard After Being…