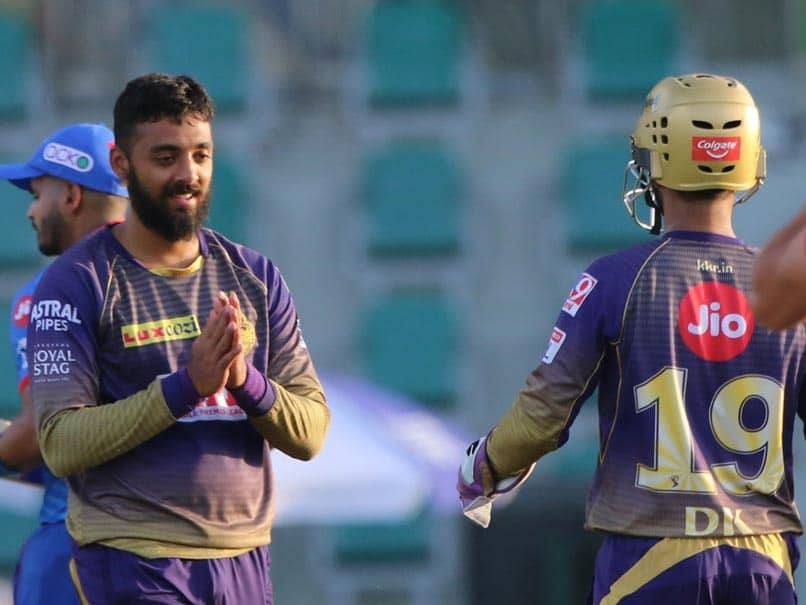 IPL 2020, KKR vs DC: Varun Chakravarthy finished with figures of 5/20 from his four-over spell© BCCI/IPL


Kolkata Knight Riders’ mystery spinner Varun Chakravarthy produced a magical bowling spell against Delhi Capitals picking up the maiden five-wicket haul of his IPL career at the Sheikh Zayed Stadium, Abu Dhabi on Saturday. This was also the first five-wicket haul of the ongoing edition of the IPL and it helped KKR beat Delhi by 59 runs. Chakravarthy ran through Delhi’s middle-order dismissing big-hitters like Shreyas Iyer, Rishabh Pant, Shimron Hetmyer, while also accounting for wickets of Marcus Stoinis and Axar Patel.

Wicketkeeper-batsman Rishabh Pant was his first wicket who tried to clear the fence but lacked proper connection and was caught in the deep by Shubman Gill in the 12th over.

In his next over, the leg-spinner got rid of Shimron Hetmyer and Shreyas Iyer off successive deliveries to derail Delhi chase. Both Hetmyer and Iyer were deceived by Chakravarthy’s flight and were caught at the fence.

Chakravarthy handed Delhi another twin blow in his next over by removing Marcus Stoinis (6) and Axar Patel (9) on the first and the fifth delivery of the over. He finally finished with figures of 5 for 20 from his four-over spell.

Chakravarthy’s brilliant bowling display ensured KKR cruise to an impressive win over Delhi Capitals, who were on top of the table before last night.

Earlier, KKR, riding on an explosive partnership between Sunil Narine (64 off 32) and Nitish Rana (81 off 53 balls) for the fourth wicket posted an imposing 194/6 in 20 overs. After losing three wickets inside eight overs, KKR were in a spot of bother but the duo strung together a 115-run stand off just 56 balls to help them reach a formidable total.

This was KKR’s sixth win of the season from 11 matches and they consolidated their position in the top-half of the table.

Don’t Want To Feel Like Laughing Stocks, Says Kieron Pollard After Being…