Massive Fire At Kolkata’s Baghbazar, 25 Fire Engines At The Spot 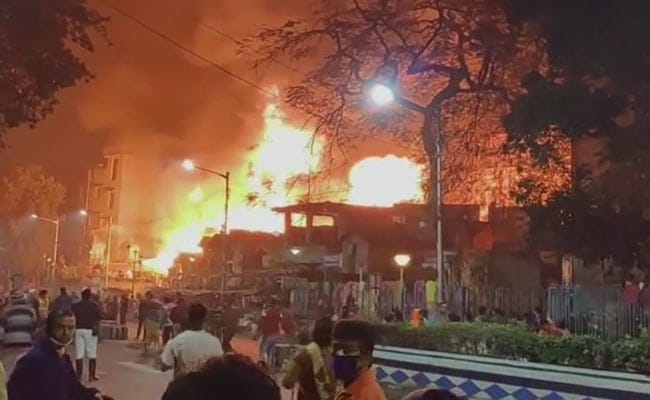 A massive fire broke out in north Kolkata’s Baghbazar area this evening. 25 fire engines are at the spot trying to bring the fire under control which broke out at a slum in the area.

At least 40 shanties have been burnt to ashes in the fire that broke out near Baghbazar’s Women’s College. Blasts were heard in the slum which police suspect to be of gas cylinders at the houses on fire. The wind has made the situation worse.

There were no reports of any casualty as most of the people were evacuated on time. The fire is still blazing 1.5 hours after it started. Efforts are on to control the blaze.

Locals alleged that firefighters reached the spot at least an hour late, because of which the blaze went out of control.

A couple of police vehicles were vandalised, following which a team of the Rapid Action Force (RAF) was deployed to control the irate mob, the officer said.

Traffic came to a standstill to and from the northern part of the city due to the fire. Electricity has also been snapped in the area.

The blaze also spread to the adjacent Sarada Mayer Bari as the firefighters escorted the saints out, an officer of the fire department told news agency PTI.

It is not clear how the fire broke out.

“The reason for the fire is not yet known. The firemen are fighting it tooth and nail and hopefully, it will soon be under control. We have emptied the entire area. There were several blasts, which could be because of the gas cylinders,” a senior officer of the Kolkata Police told PTI.

After Racist Comments In Sydney, Umpires Offered India To Leave The Field, Reveals…

Supreme Court Asks UP To Hold Enquiry If Organiser Of…

Mohammed Siraj Says “Dedicated All My Wickets To My Father”

Red Bull & Honda Have Agreed On Engine Deal For 2022