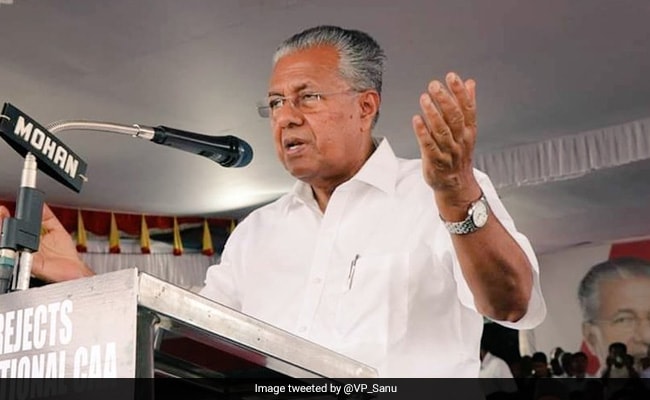 It’s unfortunate that the trial is not taking place in our country, Pinarayi Vijayan said (File)

Kerala Chief Minister Pinarayi Vijayan on Friday said it was unfortunate that the trial of the Italian marines, accused of killing two fishermen off the Kerala coast in 2012, was not taking place in India and said the state was not in favour of withdrawing the case from the Supreme Court.

The Hague-headquartered Permanent Court of Arbitration Tribunal has upheld the conduct of the Indian authorities in the Enrica Lexie case in which the marines were accused of killing the two Indian fishermen and said New Delhi was entitled to get compensation in the case.

But the tribunal also stated that the marines cannot be prosecuted due to the official immunity enjoyed by them.

“It’s unfortunate that the trial is not taking place in our country. Some media reports suggested that we were unable to pose our arguments well with the Tribunal. However, about the compensation, our country needs to take strong steps to ensure it,” Mr Vijayan said.

When asked about the Centre’s decision to file an affidavit in the Supreme Court to withdraw the case, Mr Vijayan said Kerala was not in favour of it.

“If the centre is planning to withdraw the case, Kerala is not in favour of it and will inform the centre,” Mr Vijayan said.

The international tribunal had held that the two marines violated the international law, and as a result Italy breached India’s freedom of navigation under the United Nations Convention on the Law of the Sea (UNCLOS), External Affairs Ministry Spokesperson Anurag Srivastava said during an online media briefing on Thursday.

A Very Sara Ali Khan Post For Ibrahim; Taimur And…