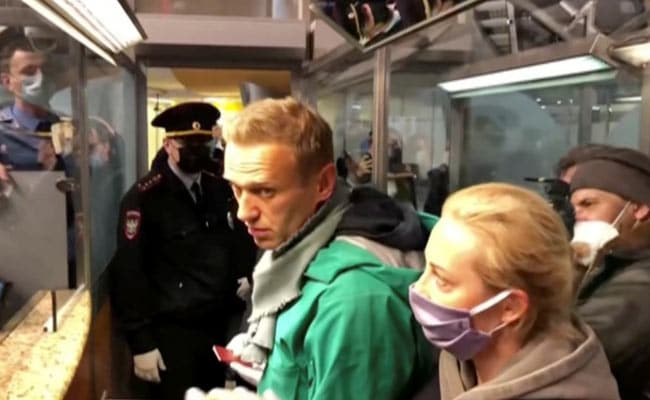 Russia’s most prominent opposition leader Alexei Navalny called on Monday for his supporters to take to the streets after a hastily organised court ordered him jailed for 30 days.

The makeshift court — set up in a police station on the outskirts of Moscow where Navalny was being held — agreed to a request from prosecutors for Navalny to be kept in custody until February 15.

Police then moved the Kremlin critic to Moscow’s Matrosskaya Tishina prison, infamous as the jail where lawyer Sergei Magnitsky died in 2009 while being held under pre-trial arrest.

Navalny, President Vladimir Putin’s best-known domestic critic, was taken to the station after a dramatic airport arrest on Sunday that prompted condemnation from the West and calls for his immediate release.

In a video released by his team shortly after the ruling, the 44-year-old anti-corruption campaigner urged his supporters to protest.

“Do not be silent. Resist. Take to the streets — not for me, but for you,” Navalny said.

The head of Navalny’s regional network Leonid Volkov said preparations were underway for protests to be organised across the country on Saturday.

Navalny was arrested as he returned to Russia from Germany for the first time since he was poisoned with a nerve agent in August and flown to Berlin in an induced coma.

Russia’s FSIN prison service said that it had detained him for violating the terms of a suspended sentence he was given in 2014, on fraud charges he says were politically motivated.

Navalny’s lawyer Olga Mikhailova told reporters outside of the police station Monday that a court hearing on turning that sentence into a prison term will take place on February 2.

In another video posted by his team from the courtroom before the Monday ruling, Navalny said he did not understand how the session could be taking place.

“I’ve seen a lot of mockery of justice, but the old man in the bunker (Putin) is so afraid that they have blatantly torn up and thrown away” Russia’s criminal code, Navalny said.

With temperatures hovering around -20 degrees Celsius (-4 Fahrenheit), several dozen Navalny supporters gathered outside the police station shouting “Freedom!” and “Let him go!” as police looked on.

One waved a pair of underwear attached to a pole, a reference to claims that the Novichok nerve agent used against Navalny had been placed in a pair of his underpants.

Protesters also gathered in Saint Petersburg, where OVD Info, which monitors detentions at political protests in Russia, said at least 46 people were detained.

“It’s a disgrace. You can’t say what you think,” 50-year-old protester Natalya Semyonova told AFP at the scene.

Navalny emerged a decade ago with his Anti-Corruption Foundation publishing anti-graft investigations revealing the lavish lifestyles of the Russian elite.

The leading Kremlin critic has repeatedly led large-scale street protests against Putin, most recently in the summer of 2019, and was gearing up for another challenge to authorities during elections to the lower house State Duma in September.

He was evacuated to Germany after falling violently ill on a flight over Siberia in August from what Western experts eventually concluded was a poisoning with Novichok, a Soviet-designed toxin.

Navalny accused Putin of ordering the attack, a claim the Kremlin vehemently denies. Russian police have not opened an investigation, citing a lack of evidence.

Navalny is also facing potential new criminal charges under a probe launched late last year by Russian investigators who say he misappropriated over $4 million worth of donations.

His arrest on Sunday drew widespread Western condemnation, with the United States, European Union, France and Canada all calling for his release.

Others joined that call on Monday, with EU chief Ursula von der Leyen saying Russian authorities should “immediately release him and ensure his safety” and German Chancellor Angela Merkel’s spokesman saying she condemned the “arbitrary arrest”.

The United Nations human rights office said it was “deeply troubled” by the arrest, while Britain’s Foreign Secretary Dominic Raab said it was “appalling”.

“He must be immediately released,” Raab wrote on Twitter.

“Rather than persecuting Mr Navalny Russia should explain how a chemical weapon came to be used on Russian soil.”

Navalny was poisoned with the same chemical that Britain says was used in the attempted murder of former spy Sergei Skripal in the English town of Salisbury in 2018.

Russia has hit back at the condemnation, Foreign Minister Sergei Lavrov on Monday saying it was an attempt to distract attention from domestic problems in Western countries.

“It looks like Western politicians see this as an opportunity to divert attention from the deepest crisis the liberal development model has found itself in,” he said.

Russia frequently accuses the West of unfair criticism of its domestic policies, pointing to divisions in Western countries such as those that led to the storming of the US Capitol or the Yellow Vests protests in France.

WHO Team To Scrap Interim Findings On Probe Of Covid…