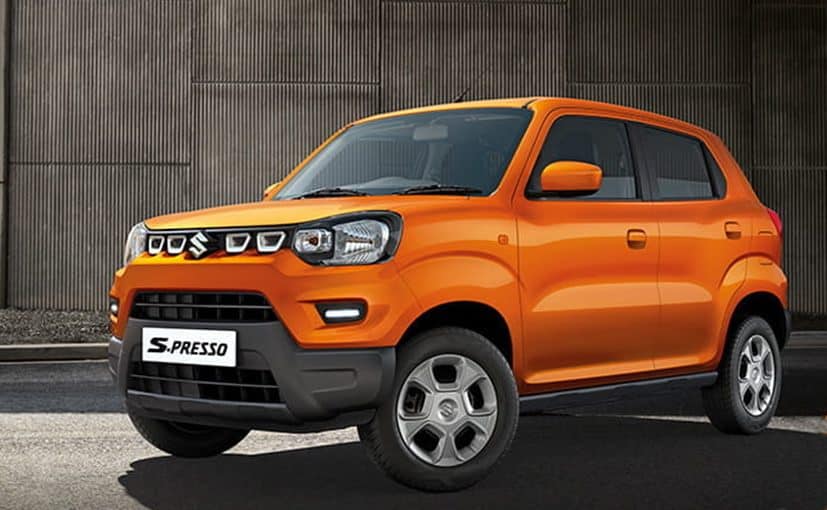 The Maruti Suzuki S-Presso Global NCAP crash test has raised a lot of queries and concerns about the safety standard of the car, which received a zero-star rating from the safety watchdog. And that’s not just in India, but also in South Africa, which is one of the export markets for the Made-in-India Maruti Suzuki S-Presso. Ever since the results came out, several car buyers in South Africa have expressed concerns regarding purchasing the S-Presso on social media. To which, surprisingly, Suzuki South Africa’s (SA) official handles has commented saying that the model sold there are safer than the ones sold in India. Now we did reach out to Maruti Suzuki India for a statement on this, however, as of now, our email remains unanswered.

Now, while the S-Presso sold in South Africa is manufactured in India, the model sold there gets dual airbags and front seat-belts with pre-tensioners and load limiters as standard from the base model. In India, however, the drive and co-driver seat-belts, with pre-tensioners and load limiters, are offered only as an optional extra with the base trim, and as standard from the mid variant and above. At the same time, dual airbags are an option for the mid variant and standard in the top-end models. As a rule, Global NCAP tests only the base trim that gets all the standard safety features. 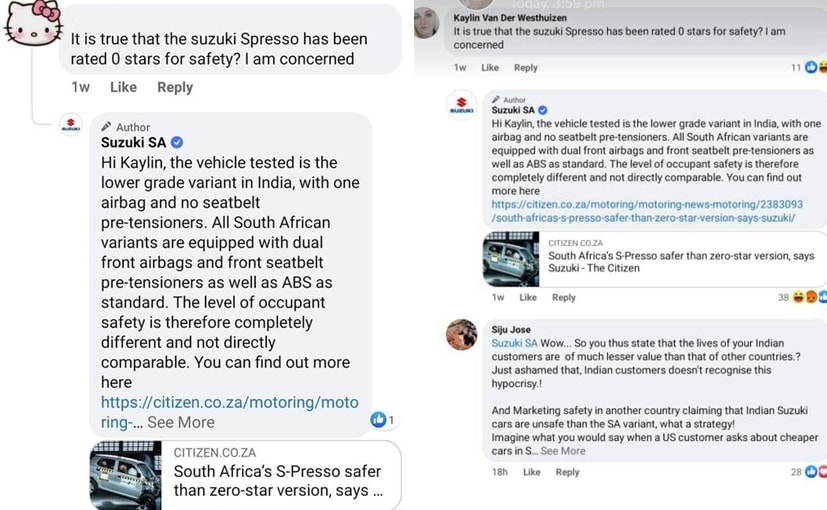 Suzuki SA in its comments said, dual airbags and front seatbelts with pretensioners and load limiters are standard in the South African-spec S-Presso, but not in India-spec model

Speaking to a South African publication, The Citizen, Brendon Carpenter, Suzuki Auto South Africa’s national brand manager said, “The model that was used in the crash test is an Indian-specced model that is built exclusively for the Indian market. That particular model only features an airbag on the driver’s side and it also doesn’t have front seat-belts that feature pre-tensioners with load limiters.” He also added, “The additional airbag and seat-belt enhancements make the local model a much safer vehicle. The S-Presso offers good value, but not at the expense of safety.” Having said that, we have to mention here that the African-spec S-Presso is yet to undergo a crash test by the Safer Cars for Africa programme, so we will have to wait to see how drastic the difference is between the two models with regards to safety. However, Suzuki SA’s comments on social media have also angered several Indians who are seeing this as a glaring admission by Suzuki that Indian market is treated as inferior, when compared to other markets.

When the crash test results came out earlier in November 2020, Maruti Suzuki India said, “Safety is a critical issue and is therefore closely regulated by governments around the world as they are responsible for the safety of the people in their countries. It cannot be left to the opinion of any self-proclaimed party. The Government of India has recently increased the stringency of car crash test standards and made them identical to European standards. All products of the company are fully compliant with these global standards and duly tested and certified by the Government of India.”

Also Read: Maruti Needs To Talk To Partner Suzuki To Understand What NCAPs Are Striving To Do,Says Global NCAP President

Even if we consider this, that fact remains that unlike Maruti, home-grown carmakers like Tata Motor and Mahindra have been able to achieve 4 and 5 stars for all their new cars that were launched in the last 3 years. In fact, Tata Motors’ entry-level model, Tiago had received a 4-star safety rating from Global NCAP earlier this year. On the other hand, in case of Maruti Suzuki India, only the Vitara Brezza has received a 4-star rating from Global NCAP, while the rest all models in the company’s line-up have received 3 stars or less. In fact, Global NCAP President and CEO, David Ward, who has been asking Maruti Suzuki to improve its safety standards, even commented that maybe Maruti, the Indian automaker, should speak to Suzuki, its Japanese partner, to understand what the New Car Assessment Programme (NCAP) are striving to do globally.

Importance Of Riding Gear When On A Two-Wheeler