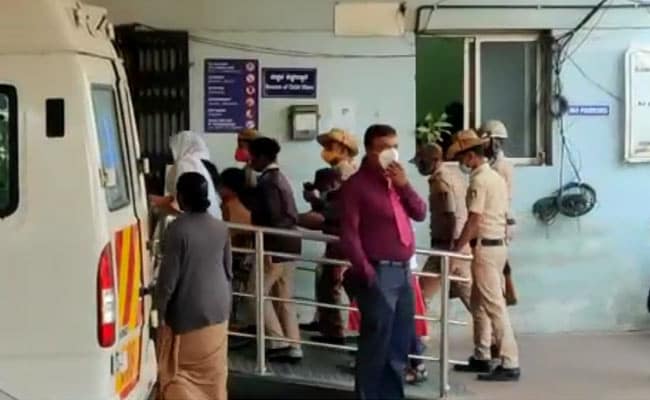 VK Sasikala’s oxygen saturation level was 80 (against the normal of 95 and above) on Wednesday.

Ms Sasikala, who had earlier tested negative for COVID-19, was stable but she will be undergo various tests and monitored for now, they had said.

She was referred to another hospital for a CT Scan and other tests, Director of the Bowring Hospital Dr Manoj Kumar HV said on Thursday.

Serving her jail term at the Parappana Agrahara Prison in Bengaluru, she was admitted to the Bowring and Lady Curzon Medical College and Research Institute, also known as Bowring Hospital with fever and breathlessness on Wednesday, a week before her release.

Ms Sasikala’s oxygen saturation level was 80 (against the normal of 95 and above) on Wednesday evening when she was admitted to the hospital.

“Yesterday when she came she had a fever and breathlessness. Her oxygen saturation was 80 per cent. Her rapid Covid test was negative… Today her condition is good. Her fever and cough are reduced. She is comfortable. She is walking around,” Dr Kumar said.

“She should be discharged in two-three days. As of now, because of the breathlessness, we think it is SARI (Severe Acute Respiratory Infections),” he added.

The doctor said she was sent to the Victoria Hospital for the CT scan this afternoon. Before that, she had undergone a Rapid Antigen and RT-PCR tests which showed her COVID-19 reports negative, Dr Kumar said.

Ms Sasikala’s nephew and Amma Makkal Munnetra Kazhagam general secretary TTV Dhinakaran, who rushed to Bengaluru on learning about her illness, told reporters she was stable.

“I got reliable information that her health is stable. Doctors are looking after her very well. Good care is given. They are monitoring her,” Mr Dhinakaran said.

Sasikala, lodged at the Parappana Agrahara Prison, was sentenced to four years imprisonment in February 2017 in a disproportionate assets case.

Her illness comes at a time when she is just six days away from her release from prison on January 27.

UP Man Acquitted Of Rape After 20 Years In Prison